Last month has been a busy and strange month. I seemed to be doing a lot of stitching and lost my mojo a bit. I have some lovely projects and SALs on the go but have been struggling with the motivation to get going on any of them. I think I may have taken too much on at the start of the year so I am going to have to cut back on a few things. I have not signed up for the second round of the Prairie Schooler exchange for example and although HOE are running some great exchanges at the moment, I have resisted signing up for any of those too. I am doing a Drawn Thread exchange which is due out a week tomorrow so I'll be having a break from exchanges after that I think. I need to get on and start my pifs too as Elisa sent hers to me last week.

So here's the PS exchange that my recipient received from me.

Here's my finished "mustard scarf" I started. Not the best pic but I hope you get the idea. This was a freebie from Ravelry.

Here is Elisa's wonderful pif that she sent me. It is my first circular pinkeep and is so cute. Some great extras too. Thanks Elisa.

I do have a pic of my biscornu from february too but as usual my camera is on the blink so will have to wait to download it.

Now, I mentioned this last month has been a strange one. There are some things happening to our family at the moment that are quite bad. If I told you details you'd think we were in the middle of a thriller film. That may sound overly dramatic but non the less true. One thing is that our "best man" has turned against us (for no rashional or apparent reason) and has been sending both of us some pretty nasty hate mail and is set upon ruining our reputations and confidence. He has cut himself off from us and hopefully we won't hear from him again. It has been extremely hurtful and hard to bear and very tiring to boot. The other thing which I can't share a lot about is to do with dh's last job. He left there due to some rather unscrupulous business practices (let's say) and his ex boss has just been arrested and charged and the police want dh to make a statement. However, doing so, could put us in a (let's say) dangerous and vulnerable position. You get the idea. Sounds like a drama right? So all in all, we've been having a tough month of things. To top it off, one of our close friends has been taken into hospital with blood clots in his leg and lung and has a shadow on his heart. So taking all of this into account, it is probably no wonder that I have very little motivation to stitch or blog which is why this post has been a long time coming. It has left me feeling extremely drained and dh has been away for most of this year which hasn't helped. I have also "left" facebook because of some of these things and other reasons too so sorry to all the stitcher facebookers out there.

Thank you so much for the awards. I got one from Sally and one from Elisa. They mean so much to me to know that I have been thought of by you guys. I pass it on to my regular commentors. 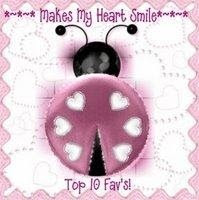 I am away next weekend with some of the Jayne's Attic crew on their yearly meetup. Hopefully, it will give me the refreshment I need and the motivation to get back into my stitching. Hope you are all doing a bit better than me at the moment.
xx
Posted by Hazel at 4:17 pm

I can well believe all of that after experience in my own life...you just cant believe it is happening to you can you!

I recommend chilling and relaxing and not putting yourself under anymore stress by hitting deadlines etc. You have 365 days for a PIF, so take a month out...and I hope things sort themselves out soon
(hugs)

(((Hazel))) I'm sorry to hear that things have been so rough for you and your family lately. I hope that things improve soon.

I'm so sorry you are experiencing all these difficulties, life does give us some very trying times to deal with sometimes. I'm sure your faith will help you through.
{{big hug}}

I must say that I feel the same way too. I have been stitching so many things for everyone else, I seem to have completely lost my stitching mojo.

I am sorry to hear of all the problems you have been having. I hope the remainder of the year treats you and your family better.

Sending you hugs, Hazel, and praying that these situations will be handling rightly. May God give you peace and joy in the midst of it. :)

Oh Hazel, so sorry to hear that you are experiencing so many difficulties right now! Sending hugs your way!

Your Prairie Schooler exchange and your scarf are wonderful!

Goodness gracious girl, you take it easy and be careful. I hope your weekend is relaxing and full of stitches.

Sending warm hugs your way! I hope things improve for your family soon and that your love of stitching returns to the forefront. Hang in there girl!

Great scarf, love that big button on it too.

I also really love your PS pinkeep, it's so pretty.

I hope your problems sort themselves out, and that you and your family stay safe.

Hazel, I hope that everything in your crazy life will soon be smoothed over and behind you. What drama! You take care, and try not to let the stress get to you!

Hazel I'm so sorry to hear that things have been rough for you and your DH lately. Lots of hugs and positive thoughts coming your way.

As Gaynor says you have 365 to do your PIFs so relax and don't worry about them. Your PIF from Elisa is gorgeous.

Love the PS exchange you stitched.

I hope things get better soon for you and your family.

I have a mantra for when I want out of anything I am in. THIS TOO SHALL PASS.

Hope things get better for yo and our family.
Your stitching and knitting look great!

I'm sorry to hear that things have been so rough for you and your family. i hope all be better soon.

Oh my, Hazel, I'm so sorry to hear that you and your family have been going through such rough times. I do hope that it will be over soon for you all.
The PS pinkeep is so cute. It's from a chart that has been on my to-stitch pile for quite some time.
I can understand that you refrain from further exchnages. Sometimes we just need a pause from exchange stitching. I will be doing the same after finishing my current committment stitzching.

Oh Hazel sounds like a nightmare time for you and your family {{hugs}} Im so sorry to hear this and i really hope things get sorted soon.
Will pray x

Wow Hazel! Your life is like a thriller! I'm so sorry and I hope all the craziness ends soon!
I, too, decided to cut back on some of the groups I was in. I just left 3! PS, being one. Just need not to have extra deadlines right now and I'm not big on finishing:) Your PS piece is adorable! Beautiful finish!
Hope this week is going better for you!

** Hazel ** Praying for you! Keep your head up and your spirits will soar! Trust in God at all times!
Fiona x

Sending hugs sweetie sorry I'm not closer so I can pop round and give you a proper hug I'm always at the end of the phone/e-mail if you need a rant, I knew you were having prob's didn't realise things had esculated, you are a very strong, kind and caring person don't let anyone make you think other wise. Your exchange piece is stunning you always pick lovely designs and your scarf is beautiful I love the colour. The JA thing came around so quickly I did want to go but circumstances just got in the way, send me mail sweetie I'm missing you xx

Sorry for your slump and current troubles Hazel. Sometimes it's good to put a few things aside and not feel overwhelmed. It's easy to get all excited about new things sometimes you get a little stressed trying to do them all. Sorry you have been betrayed by a friend - it certainly can hurt when someone you trust lets you down. Blessings and hope things start looking up soon!

Love your PS exchange and the scarf looks so warm and soft.
Hope your life will change for the better soon.
Hugs.

That sucks!! I hope things turn around and you can start enjoying married life!!

Your PS pinkeep turned out wonderful, and your scarf looks so nice and snuggly. So sorry to hear about all the difficulties you've been having. How awful to have to deal with any of them let alone all of them at the same time. I hope things resolve themselves quickly and life gets back to more normal soon.
Sue

I am so sorry for all the difficulties you're struggling through right now. Hang in there! It will get better!

Your exchanges are beautiful. I really like that hummingbird!

Hazel
United Kingdom
I'm a 44yr old mum who loves to stitch and crochet her heart out. I find colour theraputic and love bright colours of the rainbow as well as lovely soft pastel shades. I am a full time secondary English teacher at a small, independent Christian school and have been there for eight years. Quite into the vintage vibe at the moment and love coffee, cakes, baking, reading, anything spotty/stripy, brave, gutsy people who are truly themselves, thunderstorms, my smiley, happy kids, and God who still loves me after all.

This is a Flickr badge showing items in a set called Crochet stuff. Make your own badge here.

Constantly being edited and updated.
I am open to gently used charts.
Love most things and autumn is my favourite season esp the colours but I don't like halloween designs or anything "witchy" or horoscopes etc.
Fabrics!! I am desperate for fabrics in neutral colours, creams, beiges, perhaps pale blue/grey. Evenweaves/linens in any colour.
Have just started a new wishlist on 123stitch.com to give some ideas. Just use my email address: hazelhenry@hotmail.com in wishlist section.

SAL links and other freebie sites

Other interesting blogs and links